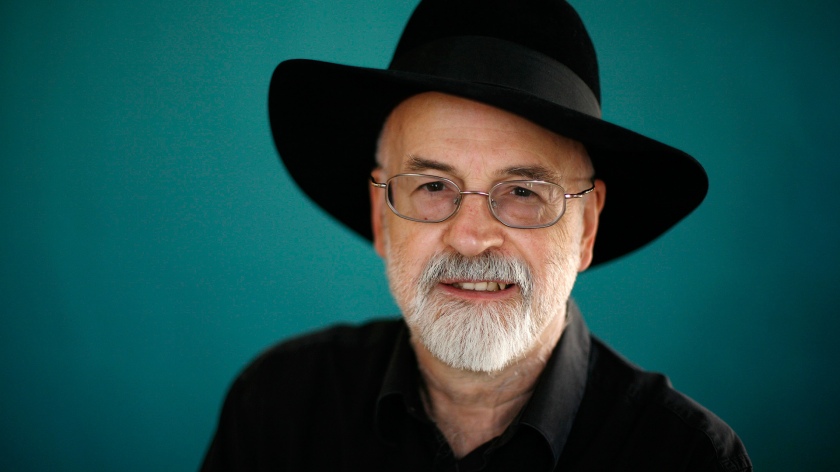 Today is Sir Terry Pratchett’s birthday. He would have been 68. That’s not quite a grand old age, but he made the most of his short years. He wrote over 70 novels, in which he skilfully entwined fantasy and humour, and all the while, he made commentary on society and references to all levels of culture almost without you realising.

When I first discovered the joys of Pratchett, many years ago, it was the first time that I really discovered there could be humour in books. That makes me sound dumb, I know, but until then, all the books I’d read were serious and dramatic. They were either important works of literature, classics, or they were hard-hitting and deep. So when I picked up my first Discworld novel in my late-teenage years, it was a breath of fresh air – especially as I was going through university at the time (it really is amazing what a good laugh can do for your stress levels!)

One of the things that I love most about Pratchett’s books (apart from the laugh-out-loud-on-a-train moments) is the way in which they can be read at any level. If you want a bit of a silly laugh, that’s great! But if you want to put all the links together and enjoy a good satire, the books have got that too. And if you want to read the social commentary that he gently laces through his narrative, you won’t be disappointed either. Regardless of what level you choose to read them at, these books are enjoyable and that is a rather clever thing indeed.

If I had to pick one, I would have to say that Terry Pratchett has been the single biggest influence on me in terms of writing. That’s not to say that I aim to emulate him, because I don’t (not that I’d be able to anyway). I don’t want to be Terry Pratchett, but he taught me a lot. He taught me that not everything has to be so serious and that we can forget all the turmoil and misery in the world, even if for just 250 short pages. He taught me that numerous different stories can be tied together by the world that they live in rather than by the tale they have to tell; he taught me that you can visit the same characters again without being restricted to a ‘sequel’. He taught me that intelligence and knowledge don’t have to be stuffy and academic, but can be light-hearted and fun. Most of all, though, he taught me that it’s okay to be silly, it’s okay to have some fun and a good few laughs – and that’s exactly what I aim to do with my own writing!

In a sentence, Terry Pratchett was an inspiration because he gave the world the gift of laughter, and in an era when everything is embroiled in seriousness, that truly is a wonderful thing.