Hailing from the Northamptonshire/Cambridgeshire border in England, Bryan Pentelow is the author of the Sprocket Saga children’s books (the first of which I loved – check out my review), and Sea Change, the first in a series of sci-fi books targeted towards an older audience. He also has a page of cute animals on his website so really, what’s not to love?

Tell us a little bit about your Sprocket series and what inspired you to write it. 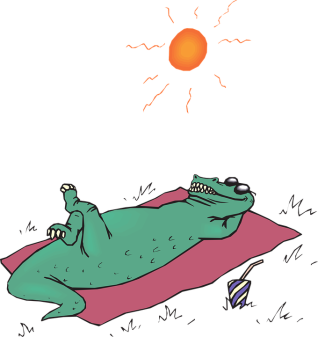 I wrote the first Sprocket book as something to do on holiday, and as a book to entertain my first granddaughter. Back then, my wife enjoyed sizzling in the sun while all it did for me was to give me skin like bubble wrap. So while she toasted, I put pencil to paper and followed where Brassroyd and co. lead me. The Sprocket Sagas became a series because my two children were inconsiderate enough to produce four grandchildren and you can’t write a book for one and not produce something for the other three, so that meant four books. By the time I finished Sprocket and the Heart of the North the oldest grandchild was well into Sprocket and wanted more and more, hence another full book and a Christmas short story.

Do you plan on writing any more for the series? What are you working on at the moment?

I have no current plans for more Sprocket books and would like to finish the sequel to Sea Change, my short sci-fi story. However, I am getting pressure from the grandkids for more books and am currently working on the first of a new fantasy series which is for an older age-range and has darker content. Watch this space…

How about writing for adults? Sea Change is aimed at a slightly older market. Do you want to write more for adults or would you prefer to stick to kid’s books?

I write where the characters lead me, and have no particular readership in mind. If the story has adult themes then it is for adults, if it leads to a younger audience then so be it. I could no more write romance than fly, and I find the use of profanity – except when someone hits their thumb with a hammer – to be gratuitous. I do try to write characters that react as any of us would under given circumstances, to show disbelief, anger, and joy by turns to fit with the plot. I don’t drop a dragon into a story and expect the world to say “Oh, a dragon,” and carry on as if this happens every day and has no consequences. Stories need to carry the reader with them and actions have reactions, if something the size of a bus takes to the air then there should be some science and logic behind its ability. Just saying it’s magic is a cop out.

When you write a book, are you a planner or do you just jump right in and see where it takes you? Have you done much research into dragon mythology (or anything else for that matter)?

Oh, I jump right in. If I get an idea then I must write it before it flutters off to someone with more time to give to its development. Only by writing can I tie an idea down, and what planning I do is done on the run as I hit brick walls or huge chasms in the story line, then I will explore alternatives and change and rewrite to fit the new direction. This can be frustrating and my laptop is cluttered with ideas which have stalled and are waiting for the muse to pull aside the curtain and reveal where to next.

On your website, there is a picture of Mrs. Mumbly. Was her character inspired by a real pet?

No. I have always loved English Bull Terriers but have never owned one. She just seemed exactly the sort of dog that Brassroyd would own. This breed is hard, loyal, and fierce if anyone threatens their people, and as soft as butter to those they love. They are no nonsense dogs firmly rooted in the everyday so the ideal foil for a fantasy. I know that there is a Northern stereotype for flat caps, mufflers, and whippets but a bull terrier fitted better with a scrap yard. She is part guard-dog, part friend ,and fills in as a small bulldozer for shifting heavy objects, just what you’d need around piles of scrap metal.

What would you do if you found a dragon in your garden?

It depends on the size and type. If large, I would probably run like hell. If small, then offer it small dishes of various foods till it took a fancy to something, and then give it some more. My house is entirely unsuited to keeping dragons as it is a brick built semi-detached with wooden floors and wall to wall carpets. What you need for dragon keeping is a large, open plan castle with thick stone walls and solid stone flagged floors. An extensive library filled with books about magical creatures and how to look after them would also be useful. They are really outdoor creatures needing lots of space and a non-flammable nesting site. Even Hogwarts didn’t allow the keeping of dragons as pets.

If they turned the Sprocket series into a movie (or even a series of movies), who would you like to see play Brassroyd?

Peter Sallis. This may not be a familiar name to those across the pond but he was the voice of Wallace in Wallace and Grommet the animated cartoon TV series. Though born in the south of England he has become the archetypal Northerner and has just the right sense of humour to get the best from the roll.

If you could go on an adventure with one fictional character, one author, and one other person, who would you choose and why?

Until recently I would have chosen Nathan Garret, the sorcerer from Steve McHugh’s books who seems to be able to cope with anything the everyday and magical worlds throw at him. Terry Pratchett, for his sense of humour and wonderful way of looking sideways at the world’s problems, and my eldest granddaughter Sophie, who is always up for adventure and anything likely to be fun. But to have a second bite of the cherry, then Sam Vimes from Ankh-Morpork City Watch for his fortitude and patience in a world gone mad. Robert Lee Beers, another author with a warped imagination and sense of humour to match, and Sophie, because she would love every dreadful moment, as long as we survived, and with any of these we would.

Dogs or cats?
Dogs every time.

Handsome or intelligent?
Intelligent: I’ve lived without handsome this long I can survive without it.

Ebooks or paperbacks?
Ebooks: I have an endless appetite for books and no more space for bookshelves.

Bacon or black pudding?
Both if possible, and some crunchy fried bread.

Sunshine or snow?
Sunshine, but only with some shade and a large G&T

Children or adults?
A mix of both for preference. Without adults; no children, without children; no fun.

Chocolate or chips?
Please don’t ask me to choose I neeeeed both.

Reading or writing?
If forced it would have to be reading, because without it my writing would be total gibberish.

Arms or legs?
Arms. Without arms how would you scratch the inevitable itch?

Bryan Pentelow’s work is really worth checking out, regardless of your age! Find some more information about him on his Amazon author page, his website, or on Facebook. If you ask him nicely, he might even give you some dragon keeping tips!