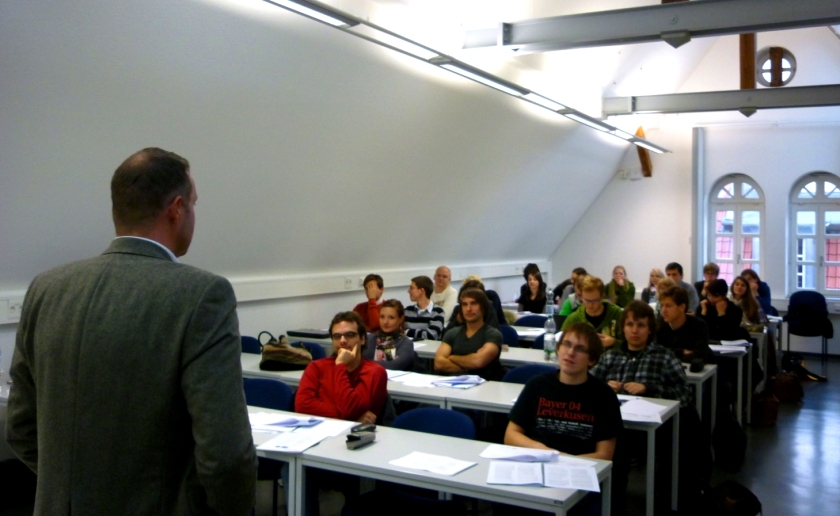 The noise around her becomes a murmur, words turning into indistinguishable sounds. The room slowly darkens and the sentences merge from distinct to abstract. They distort and and make no sense. They come alive, colourful swirls in the darkness that she leaps up and tries to reach, until…

Her head snaps up and her eyes flick open. The sounds become words once more and she looks around at the audience, rapt in the presenter’s speech. Surely they can’t be finding it that much more interesting than she is? She bites down hard on her tongue, letting the pain pierce through her tiredness. Must. Not. Fall. Asleep. She curses herself.

The room is warm and comfortable, the noise a gentle, repetitive, lulling murmur made up of words she barely understands. The darkness beckons, calling out to a lack of consciousness that seems so delectable, delightful, entirely unobtainable yet just past her grasp.

The clock tick tocks in the background, slowly, patiently counting the seconds away. It has been three minutes and 24 seconds since the last time she looked. Perhaps if she focuses on something, perhaps the clock, the voice crying out for her to join dreamland will seem less tempting…but…no, she decides, as the words of the professor become a gentle, lulling song once more. Concentrate.

She digs her long, sharp, fingernails into the palm of her hand; the sting, if not bringing her round, at least calms her desire to doze. Tick tock. One minute three seconds this time, the seconds taking years to pass. She looks down at her papers, vowing to pay more attention as the professor continues to mumble to the group.

“Any questions?” the professor asks.

The question pulls her out of her reverie, her eyes snapping open to a suddenly bright room, and she realises that she was in the darkness’ grasp once more. She looks around in the hope that no-one has noticed her drooping eyes and nodding head. She’s in luck, she thinks. Now focus.

It’s not that it’s boring. She tells herself it’s quite interesting, if only you try. Tick tock. Seven minutes 38 this time. Not so bad, quite a chunk eaten away. Just two hours to go, she tells herself. 2 hours 10 minutes. That’s doable.

She digs the heel of her shoe into her big toe and winces. Pain is good, pain is focus, pain takes the darkness away, in an odd sort of way. Focus on the words, the phrases, the things the professor is saying. Don’t let them dance away with the light again.

Tick tock. Don’t look, she tell herself. Not again, you’ll only be disappointed. She glances at the clock as though her eye movements are involuntary. Four minutes 53. Could have been worse. She covers her mouth with her hand and stifles a yawn. Today is a whole year long. She rubs her eyes and fidgets as though her only choices are sleep or movement.

She tries to focus with a renewed vigour but it’s not long before she feels the her heavy eyelids being pulled into place and the room merges into swirls of colour and sound once more. She fights it, forcing her eyelids back with the strength of a weightlifter, making the room spin back to sense.

She turns to the man who keeps talking, interrupting, asking questions. She silently wills him to shut up as she stifles another yawn. Perhaps if he stops talking, the professor will be finished sooner and they could all get out of there. She could get into the fresh air, stretch her legs, or even go to bed – although that’s unlikely. The darkness only wants her when she can’t embrace it.