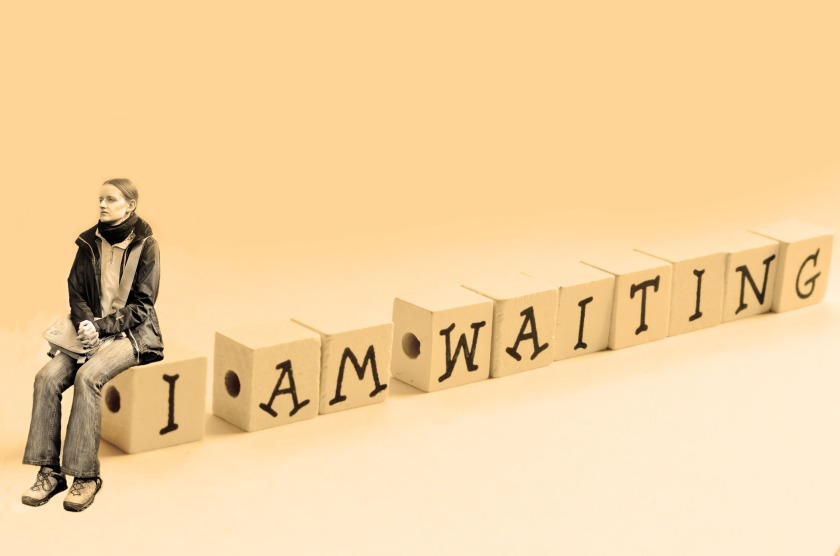 She paced back and forth, chewing on her bottom lip. Her brow was furrowed and she was close to tears.

“C’mon,” she muttered to herself. “Hold it together. You’re gonna be alright!”

She glanced at her watch and scowled. She was sure the hands hadn’t moved at all, but she had thought the same last time too. They moved, just not fast enough for her liking.

Still she paced. She pulled on her fingers and fiddled with her wedding ring.

“C, mon!” she muttered again. “I can’t wait around here anymore, I need to go!” She stared at the door, willing it to open but it wouldn’t. She felt like crumbling, curling on the floor in despair but somehow, she managed to keep herself strong.

“It won’t be long, it won’t be long,” she murmured, not caring whether the person behind the door thought she was nuts. Perhaps I am nuts, she thought.

She looked around the cold, white room – the frigid tiles on the walls and the bare, bright light dangling from the ceiling. So unwelcoming, so unfriendly. She was forced here often. More and more as she aged, the room called her any time, day or night. Sometimes, she was called and then made to wait.

Still she paced. She could her the noises from behind the door, the noises of the one called before her, the noises that she soon would be making. She fidgeted and screwed her eyes shut.

“Oooo, c’mon! I hate all this waiting! I just want to get it done!” she whined.

It worked. She heard the click of the door opening. She raised her head to see a man scuttling out, unable to make eye-contact as he left.

“Oh, thank God!” she cried. She shot through the door, locked it quickly, and then sighed with sweet relief. She was in, she could go, and as her own tinkling sound reached her ears, she mused about how satisfying it was being able to wee when you’ve been kept waiting!