It’s New Year’s Day. Typically, it’s a day of hangovers of course, but it’s also day of reflection and a day of cheesy (and often unachievable) resolutions. So that’s what I’m going to do today – reflect and resolve – because who am I to fly in the face of tradition?

I’m starting my new life this year. We’ve successfully moved and despite a rather arduous journey, we’re here, we’re alive, and George the dog is thoroughly enjoying all the extra space. We’ve rested and now we’re excited about the future holds. We’ve got a business venture here in France that we’re just getting started, and the sun is shining brightly (both literally and metaphorically). I’ve also got stacks and stacks of writing plans, and this blog is plays no small part in that.

I set up Authordom, or There About quite a few years ago but after writing a few posts, it kind of got lost in my busy brain and I forgot about it. I was struggling to think up new things to write about and eventually, I just

stopped trying to think of them. After releasing John Sharpe: No. 1,348 earlier this year though (er…that should be last year now, right?), the blog burrowed its way up from the murky depths of my mind and popped out, waving its crazy little hands, screaming at me to start it up again. So of course, I did.

I don’t have so much trouble thinking up blog posts any more. Perhaps it’s because I have a plan – review on Mondays, short stories on Wednesdays, and so on. Perhaps it’s just something that comes with practice. Whatever the reason, this blog has become a big part of my life over the last few months and that is something that I want to continue. I’m enjoying writing posts and being part of the blogging community (on that note, thanks for having me 😉 ), and I’ve met some amazing people along the way.

My short stories are fun to write, and I love reviewing books. Talking to authors and readers is awesome too – it’s inspirational and intriguing, and it makes me look at things in a way that I haven’t looked at before. So stories, reviews, and interviews are here to stay. My Friday Feels…series is fun too. I like writing about my week and what has happened, so this is definitely staying but lately, I’ve found myself wandering from ‘feels’ to thoughts’, so I’m planning on making more of a distinction between these two.

I really enjoyed doing Sunday Morning Round-Up too – my very own round-up of the week’s most interesting bookish news and reviews. To be honest, though, the workload for those posts was overwhelming. I couldn’t keep up and I found writing the posts stressful, albeit it interesting. I stopped doing them because I decided if it was making me stress, there was no point in doing it. I stand by that decision, of course, but I miss the research I did for those posts. So perhaps they are something I can revive but in a smaller, less frequent way. A monthly round-up, perhaps?

I’ll write a minimum of four posts per week: a book review on Mondays, a short story on Wednesdays, Friday Feels on (you guessed it) Fridays, and an article (such as Deconstructing the Writing Rules) on Sundays. Plus there’ll be a monthly author interview, and a monthly roundup of bookish news and reviews.

At the beginning of 2015, I had no published books and actually, I had no plans to publish books. John Sharpe sat merrily on my computer, a little shy to come out of the woodwork and certainly unsure of the path to publication. At the end of 2015 though, I have four books published: John Sharpe, of course, plus three collections of short stories, all three forming 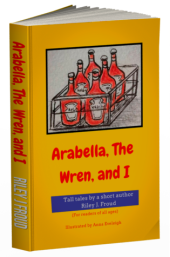 part of the Tall Tales by a Short Author series.

At the beginning of 2015, my knowledge of publishing was, well, near enough non-existent. Now, I’ve still got a lot to learn but I’m getting there. I understand more and more each day and I’m keen to make a conscious effort to learn these things, rather than seeing them as a chore (next on the list of things to learn: how to format a book for Kindle!)

At the beginning of 2015, my confidence was cellar-low. I enjoyed writing and I liked my book but I didn’t think anyone else would (I do have a rather obscure sense of humour, after all), and I wasn’t sure I even wanted to give it a go. But I did, and along the way, I met some awesome people and received some great reviews and so now, my confidence is quietly building. I finally consider myself an author over and above other lines of work and I’m happy in the knowledge that I’m going to continue to grow this.

My bookish plans for 2016 revolve around finishing and releasing the next book in my Underworld series. I want to release the next book (with a working title of Queenie’s Return) by July this year. I’ll also continue to release editions of Tall Tales by a Short Author, as and when I gather enough short stories. And as a final bookish resolution, I’m going to learn to format my own books (and do it well!)

I’ve talked a lot about how life gets in the way of passion but this year, things will be different. My life right now is so unbelievably different to how it was just three weeks ago and this slower pace and less mania will allow me to focus on the things that matter: my writing, my family, and my health (yes, yes, of course there is an obligatory fitness resolution in there too!)

So all that’s left for me to say is I hope you all have a bloody fantastic 2016!

Before all that though, does anyone know of any good hangover cures? Ugh…