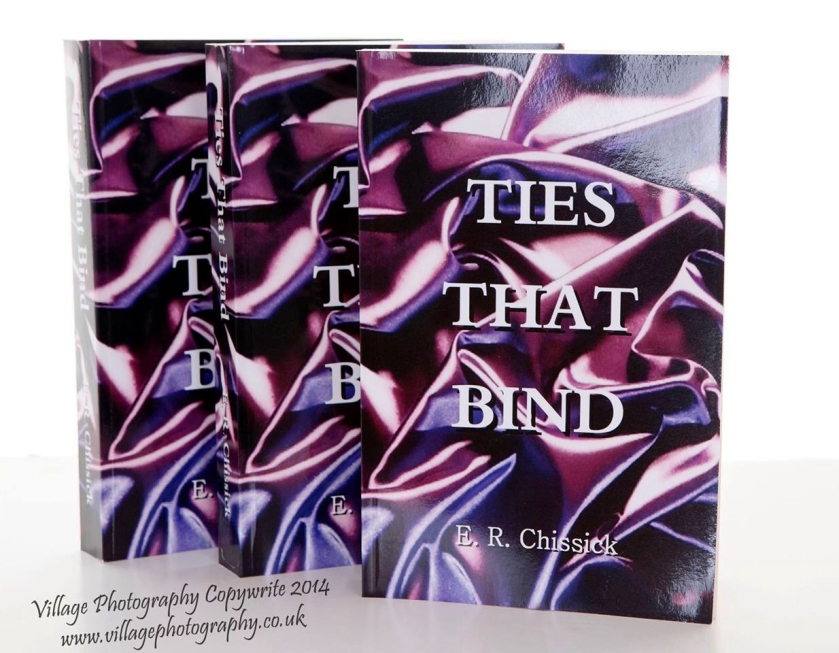 Ties That Bind is erotica. No, that’s not right. It’s a love story. No, that’s not quite right either. It’s an exciting drama complete with family feuds and a ‘will they-won’t they’ romance. Nope, not that either. Actually, it is that – it’s all of that, rolled up into a tightly wound and seamless ball of excitement and fun, with just the right amount of tension. It’s the story of Alex and the family she is trying to escape. It’s also the story of Alex and her new boyfriend, Gabriel. It’s also the story of Gabriel, his career, and his past. These threads are weaved as seamlessly in the book as they would be in life – all the individual aspects of these character’s lives bumping up against each other and merging into a single tree with many branches.

So we all know I hate romance (I’ve mentioned that once or twice, haven’t I?). It’s true. Romance stories irritate the bejesus out of me. I can’t help it, I’m just not one for cheese (unless it’s melted over chicken, or crisped up in the oven…mmmm…). One of the things I hate most about romance is that it is unrealistic (I know, I know, a fantasy author shouldn’t really give two hoots about realism but hey ho). I didn’t get that with Ties that Bind though. Don’t get me wrong, I was irritated by the romance but for an entirely different reason (because that’s just me). It wasn’t a lack of realism that got me but in fact, quite the opposite.

Let me explain. Rather than lamenting over how flat and two-dimensional the characters were (because they weren’t), I believed in them whole-heartedly. So much so that rather than rolling my eyes and groaning at the ridiculousness of it all, I actually wanted to get up and shake the characters. Alex in particular. She was so real to me that I wanted to get up from my seat and knock some sense into her.

“Don’t run away,” I wanted to scream (in fact I did scream, in my head at least) “talk to him!!” Because, you know, communication is key. Instead of becoming irritated by the romance, I was trying to think of ways to fix their problems (and, for that matter, ways to communicate my solutions to these characters on my page). So yeah, Chissick managed to get me involved in a love story – me, with my stone heart and my disdain for all things romantic. And for that, she has to be applauded.

As I mentioned before though, the romance, whilst being the predominant storyline of the book, is far from the only one and actually, it wasn’t the one that intrigued me the most. The story of Alex and her family had me gripped and I found myself craving for more of this tale. This thread introduced a whole new ‘will-they-won’t-they’ aspect to the book and the tension that it created was fantastic. As Alex did battle with a family she was desperate to escape, I was left guessing at what the outcome would be and the suspense that this created had me turning ‘just one more page’ (or rather, one more Kindle click). It was shame, I thought, that this storyline was not a stronger focus for the book but I understand why it wasn’t and as a book pipped as ‘erotic romance’, it’s unfair to complain when the main story is the romance!

The book itself jumps between points of view. For the most part, we read Alex’s story – and in first person, present tense. Occasionally though, Gabriel pops up to tell his own tale – and that is in third person, past tense. This, which could potentially be jarring and uncomfortable for the reader, is handled really well. The two are written in such sharp contrast to each other that it makes the change obvious and thus easier to understand. It prevents confusion and makes the distinction clear rather than blurred. And if I’m completely honest, it was done so well that I didn’t even realise it was happening until a good 50% into the book.

Finally, of course, no-one can review a book like this without mentioning the sex scenes. I was right when I said at the start of this review that this is not erotica. At least, it’s not out-and-out erotica. It’s not porn for the sake of it, and actually the sex scenes are fewer than I had supposed when I started out. The sex scenes, too, are not cringe-worthy, they’re not repetitive, they don’t use silly words in place of real words, they are not too drawn out or skipped over quickly. In fact, they are just right and they fit the book really well – they have their place, and they work. They turn the characters into fiery and passionate people and it gives them that extra little bit of realism. Of course, if you are of a sensitive nature when it comes to this sort of thing, perhaps this book is not for you. But also, if you are specifically looking for erotica, I’d say this book is not for you either. There are explicit scenes but there is so much more to this book than a few cheap thrills and the odd jolly. It’s not all willies and nipples. It’s a book of more substance than that, with a few nipples and willies thrown in – and that cannot be a bad thing!