Today’s short story prompt comes from Nathan Elward.  He suggested “we hide behind the sofa when we watch a scary movie, what if there was a monster behind the sofa?”

The Monster behind the Sofa

“Okay, okay!  I’ve got one,” Rhys said.  They were sat around the biggest table at the Royal Oak Hotel, steadily becoming merrier and of course, talking a lot of nonsense. “What if, right, you lot aren’t real but are figments of my imagination?  Ey?”  He raised his eyebrows and grinned knowingly, as though he’d won the day.  His mates groaned.

“Nah mate, that’s an old one.”  Sam shook his head disappointedly and his comments were greeted with a roar of agreement from the others.  Their evening was becoming increasingly rowdy.

“Alright then, smart arse.  You come up with something better,” Rhys jeered (in jest of course, for jest was the theme of the whole evening).  The laughter of the group rang throughout the building – much to the dismay of the other patrons, it must be said.

“Okay…” Sam said before taking a gulp of his beer.

All through this exchange, Eddy had sat back, quietly watching events unfold.  Now, he felt, was his turn.  He sat up, slowly and silently, and lowered his drink onto the sticky table.  Feeling his presence, the others turned to face him.

“I’ve got one,” Eddy said to the now hushed group.  He shuffled in his seat, cleared his 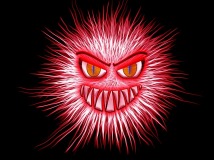 throat, and began.  “You know how you hide behind the sofa when there is a scary bit on telly?  Well what if, when you get there, there’s already a monster there?  A monster behind the sofa?”  The group groaned again.

A beermat flew through the air and hit Eddy on the head.  “We thought you had a really good one then!”  Rhys exclaimed.  “You had us all on tenterhooks!”  There was a murmur of agreement and some gentle punching and pushing of Eddy’s arm.  “It has to be at least realistic!  Monster behind the sofa…” Rhys scoffed.

“It is realistic!”  Eddy declared in defence.  “It happened to me once!”

“No really!  Listen, right!  I was about ten or eleven years old yeah?  Watching Doctor Who.”

“Geek!”  Adam shouted over the din.

“No,” Eddy giggled, “I was a kid!  Anyway, listen!  I was just a kid, watching Doctor Who, when this proper scary part came on.  I was petrified!”

“Did you wet your pants?” Rhys asked.

“Shut it you lot!”  Eddy feigned frustration but his smirk gave him away.  “Anyway, I leapt up and ran behind the sofa because that’s what my mum said to do if ever there was a scary part.  As though the back of the sofa could protect me somehow!”  Cue a round of laughter.  Eddy was enjoying being the centre of attention, as his wide grin attested.  “Anyway, this one time, I jump up, run behind the sofa – without wetting my pants, thank you very much,” he raised his voice to be heard over the din.  “And just as I rounded the back, I stopped dead and screamed.  There was this…this…creature lying there!”

“What was it?  A dalek?”  Adam teased.  “You always were scared of them things.”

“No, it wasn’t a bloody dalek, thank you!  It was…well.  It raised its head to look at me when I screamed and it released this disgusting stink!  It reeked to high heaven and it had hair all over the place, spiking out at different angles.  Two googly eyes were looking in different directions and a disgusting looking tongue lolled out of the side of its mouth.  There was drool on the floor where its head had been laying until I got there.  Proper disgusting it was too,” Eddy said, embellishing the details with a revolted twist of his lips, as though just the thought of this monster behind the sofa was enough to make him vomit.

“No man, it spoke.  When I screamed, it reached an arm out to me, stretching as though trying to grab me and it said, in a croaky old horrible voice and with disgusting breath.  It said ‘Gerraway from me’.  I think it even growled.”

“What did you do man?” Rhys asked, fully immersed in the story now and clearly desperate to know what the monster was.

“I dunno why but it was like I was rooted to the spot, I couldn’t move.  So I just screamed again.  I screamed and screamed until my mum came thundering into the room with a slipper in her hand, clearly ready to defend me from anything by slapping it with the hard bottom of her slipper.”  The other boys guffawed.  “I know, right.  A slipper?  Anyone else would have brought a knife!  Anyway, I screamed at her that there was a monster behind the sofa and she came running to my side.  But when she saw the monster, it was like all the tension went out of her.  She dropped her slipper and started to laugh.”

“She weren’t scared then?  Not a scaredy cat like you,” Adam teased.

“No, she weren’t scared.  ‘Ed, my boy,’ she said.  ‘That’s no monster.  He may look like a monster because he dressed up as one for the silly party last night but he’s not a monster – he’s your drunken father!  And he looks like he’s suffering a bit this morning, from sleeping on the wrong side of the sofa!’”