This story was written for Anna, my mum, after she gave me the title in this month’s Reader Interview: An Affair with Jane Eyre.

For the Love of Mr. Trollope

“Look Trollope!  Just admit that my beard is better than yours and we can move on with our lives.  I mean deaths.  You don’t wish to spend the rest of eternity bickering about beards do you?  Especially when you are so obviously wrong!”

“What the dickens do you know about it Dickens?  My beard is infinitely better than yours and I shall continue to bicker about it until you finally admit that you are talking absolute nonsense!”  Anthony Trollope and Charles Dickens were in heaven (naturally), arguing about who has the best beard (as you do).  “You’re missing bits of yours but mine goes all the way around my chin – like a real man’s beard!”  Trollope rubbed his beardy chin with pride.

“Oh!  Excuse me, you trollop Trollope!  My beard is like a rare and beautiful flower, pruned to perfection.”  He smiled what he thought was an Angelic Dickensian smile.  “Whereas yours is a dirty, unkempt forest!”

“Who are you calling a trollop?  Do I look like a woman, you harlot?!  A forest my beard may be, but it’s full of exotic wonders and natural magnificence.  Like a real forest, my beard has God in its midst.”  Trollope looked rather proud of himself at that one.

“God is in your beard?  Good God man!  Do you hear yourself when you speak?”  They had been arguing like this for the last 54 and a half years, minus the odd call-of-nature break, of course – and there was no sign that they were going to stop any time soon either.  “And like a real forest, is your beard littered with bugs and slugs and other horridness too?”

Trollope glared.  Partly because he was so angry and partly, of course, because he needed a moment to think up his next insult.

Angela Papadopoulos drew a chalk circle on the wooden floor, sticking her tongue out with effort and grunting gently as she shuffled backwards.  The rest of the Trollopians stood, watching in mildly amused concern and curiosity.

“Oh for the love of Trollope, Angela!  We set up this group to talk about our love of Anthony Trollope – not to perform strange rituals that are hardly going to work!”  Dave, the head poncho at The Society of Trollope Fans, was becoming somewhat flustered at Angela, who he now considered very strange indeed.  He straightened his cardigan and pushed his glasses further up the bridge of his nose in a silent protest to all this oddness.

As she completed the circle, Angela stood and grinned, feeling extremely pleased with herself.  She popped the chalk on the table and rubbed the residue from her fingers onto her skirt before plodding over to the rest of the group.

“Worry not, Dave!  I’m am doing this for the love of Trollope!”  She grinned at him and shook her head, wide-eyed as though he were silly.  “You’ll thank me when the great man himself is stood in front of us!”

“Er, I think Dave’s right, Ang.”  Mary shouldered her way to the front of the small group.  “I think we’d all much rather a nice cup of tea.”  She nodded gently.

“Yeah, how’d you even know it’s going to work, anyways?”

“You’re always negative Fred!”  Angela could barely control her excitement.  “I know it’s going to work because I saw it on TV, didn’t I?  I memorised the whole thing!  All we’ve got to do is light some candles, say some enchantments, and poof!  There he’ll be!  Maybe he’ll tell us a story or two.”

“My beard is what?!”  Dickens was stunned at the insult.  Trollope had taken it too far this time.

“You heard me, Dickens.”

“Well, I never!”  Dickens stammered for a reply.  “At least my beard hasn’t got
yesterday’s lunch still lodged in it!”

“Or has it?” Trollope asked mysteriously, raising his (almost equally) bushy eyebrows as some sort of proof.

“No, no no no no no!”  Trollope cried.  “It’s not over because my beard is infinitely better than yours!  Why, mine is so magnificent that even the birds wish to settle in it!”

The Trollopians were sat cross-legged around the chalk circle, after much cajoling from Angela.  They each had a candle by their feet and they held hands.  Their eyes were closed – or at least, they were that kind of half-closed version of closed that people do when they’ve been told to close their eyes but really, they want to see what is going on.

“The spirit of Trollope, we evoke thee!” Angela added a quiver to her voice so that she sounded the part.

“The spirit of Trollope, we evoke thee!” she said, a little louder.

“The spirit of Trollope, WE EVOKE THEE!”  This time, she shouted.

With a pop and a flash, a figure appeared in the middle the circle.  It was stooped over a slightly crooked walking stick.  The group of Trollopians collectively gasped. Their mouths gaped open – and remained like that for much of the evening.

As the smoke cleared, they saw in the centre of the room, not Anthony Trollope but instead, a crooked and gnarled old crone.  She was scowling.

“Who dare disturb my evening?  An elf was about to give me a foot rub!”  She cried in anger.  How her poor little feet did ache.

“Ugh!  Not again!”  The crone rolled her eyes.  “Wrong Trollope!  I am Old Crone Trollope.  You people really must start being more specific in yer incantations!  Why this happened to me just last week too.”

“Oh, I am truly sorry,” Angela replied.  And truly sorry she was too, for she wasn’t a bad sort, not really.

“What’s wrong with them?”  The crone indicated to the Trollopians, now frozen in their gapey stare.

“Oh, I, uh.  I think they are just a touch surprised is all.  Can you help us get Anthony Trollope?”

“I’m pulling yer leg.  I want to get back to elf anyway.  He’s good for me ‘ealth.  I can ‘elp yer get to Trollope but there are some conditions.  Not my conditions, mind you.  Just conditions because that’s ‘ow it works.  Alright?”

“I can only make ‘im come to the scene of his most widespread work.”

Angela’s face lit up.  She would be happy to travel to Barchester if it meant she could be with Trollope.  She nodded furiously.

“Okay then.  Repeat after me…”  And they began to recite the appropriate incantations.

With a pop and a flash, Angela and Old Crone Trollope disappeared.  The remaining Trollopians looked around, unsure of what had just happened.  They left convinced that Dave had drugged them.  They always did think he was a bit weird.  Poor Dave.

She looked around.  It didn’t do her much good, since it was pitch black, apart from one small slice of light above her.  She felt as though she were trapped in quite a small, metal bin with an immovable lid.  She dug around in her pocket to find her lighter.

As the flame flickered to life, Angela saw a face opposite her, staring back in silence.  An unhappy face.  It had a magnificent beard though, it must be said.  She gasped (not unlike the earlier gasp of the other Trollopians) and dropped the lighter.

“Who are you?  Where are we?”  She stuttered as she finally found her lighter and lit it once more.

“I am Anthony Trollope, and it appears that we are in a pillar box.  Probably one of those extra-large ones you find at post offices.  And you are?”

“Angela Papadopolous.  I evoked you.  Well, I tried to.  But it didn’t work.  Old Crone Trollope…”

He groaned at the name.  “Her again.”

“Er, yes.  Old Crone Trollope told me that we could only meet within your most widespread work.”

“Yes.  This isn’t the first time that this has happened.  In fact, it happened just last week.  Very droll she is too.  No need to panic though, Miss…er…”

“No, that’s no good.  I’ll never remember a nonsense name like that.  I shall call you Miss Helpsalot.  As I was saying, no need to panic,” Angela began to panic as the lighter became too hot to hold.  “All we need to do is wait it out until a postman arrives to free us.  Then I’ll be on my way.  I have pressing matters to attend to in heaven.”

“Oh, okay.  It is so nice to finally meet you though, Mr. Trollope.  I have so loved your work for many a year now.”  She burrowed her forehead in confusion.  “One question though.  Why are we in a pillar box?  I thought we’d be in Barchester.”

“Huh, yes, well.  I introduced the pillar box to Britain, didn’t you know?  Not much of a fan if you didn’t know that, are you?”  Angela stuttered an attempt at a reply but failed.  They sat in silence for some moments.  “I guess we just wait, then.”

“I guess so, yes.  It is exciting that we have finally met each other though!”

Trollope grunted in non-agreement.  “Yes, you already said that.”  As the silence stretched on, Angela just knew, in her heart, that he was going to say something profound.  “So,” he finally said.  “What do you think of my beard?  Do you think I have a better beard than that scoundrel, Charles Dickens?” 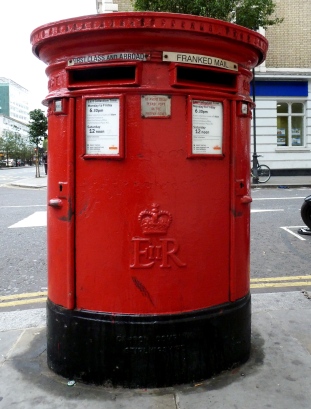