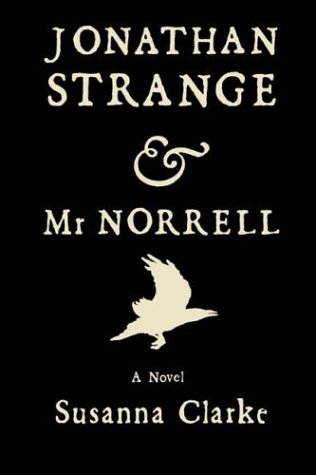 Jonathan Strange and Mr Norrell is a rather detailed history of English magic, focussing primarily (although far from entirely) upon the eponymous characters. It is also an epic fantasy novel that is quite different from anything I have ever read before and can be described by any number of the following adjectives: dense, complex, accurate, well-researched, poetic, beautiful, shocking and, at times, even a little boring and tedious.

Let me explain. I have read books with more pages and bigger word counts that are quicker, easier and not so much of a mountain-climb. It is not, then, the sheer size of this book that makes it so huge (although, let’s be honest, it is a rather chunky bugger). Rather, it is the intensity and metaphorical thickness of this monumental tome that makes it so large and looming. Daunting, even. It’s worth it, that can’t be questioned, but such enormity can never be without it’s…I’ll say ‘less exciting’ moments.

In the beginning, you are won over by a beautifully verbose narrative (my favourite kind) that is often quietly humorous. This is interspersed with a litter of fascinating footnotes which are unbelievably detailed and really bring the tale to life, explaining the magic of 19th Century England without pushing the characters unrealistically through reams of explanatory dialogue and without subjecting the reader to never-ending, mind-numbing narrative. This is completed with the introductions of wonderfully eccentric, brilliantly developed characters that are easy to believe in and even easier to visualise. An excellent start.

The middle too, is excellent – it can’t be disputed. The way that Clarke re-writes history in such a whole and believable way is fascinating and nothing short of admirable. The use of Napoleon, Wellington and the Battle of Waterloo only added to the reality of the novel and was done so well that it could be easily conceived that Strange and Norrell did genuinely play their part! I am glad these sections were included in the book – not only for the way that they developed the characters, added background to the story or created a more rounded tale.

It is here, however, that I can see people giving up on this book. The pace is slow, the story is pleasantly plodding and you find yourself wondering where in the world it is taking you. It’s not so much that you aren’t enjoying it; it’s just that you are not sure you want another 500 pages of it. As well as that, the threads to the tale are just beginning to pick up and certain parts feel a little disjointed and jarring – you feel yourself being pulled into one thread only to be yanked out of it and pushed into the start of another. It is all worth it though, if you push on, and once I had finished the book and I was looking back, I realised that there wasn’t a single section that I wished wasn’t there.

By the end, the tale weaves darkly and becomes fast paced and intense. The characters have become even deeper and more complex, more complete. The story, at some points, actually made my heart beat a little faster and harder. There are moments that are indisputably breath-taking and at points, I found myself genuinely saddened and audibly gasping (so much so that in one particular example that I turned to my husband and blurted a wide-eyed spoiler, to which he replied something along the lines of “what on Earth are you talking about, crazy person?” – although perhaps it was somewhat less polite than that…)

The end took me in so deeply that, as crazy as this may sound, it felt sudden – almost rushed. I had the slightest tinge of disappointment. Perhaps it was that I had fallen deeply in love with English magic and with the characters, perhaps I wasn’t ready to leave them. But after such an immense build up and an awful lot of input (from both Clarke and the reader), it seemed as though 100 or so pages simply wasn’t enough to tie up the loose ends. I wanted it to carry on but where I wanted it to go, I cannot say – I do not know. To go any further would be surely to start a new story.

I had started reading this a few years ago and stopped at around 200 pages. The decision wasn’t conscious; I simply didn’t pick the book up. I can see now why I stopped – I wasn’t ready to put that much into it. I can see, too, why I was wrong. Had Diane never picked this as a book club read, I’m not sure I would have gone back to it but I am so glad I did. It requires a certain amount of effort and dedication but the rewards are immense and this book has engendered in me a huge respect and admiration for both Clarke and her work. For that reason, and that reason alone, I must give her five stars.

I’d like, also, to add a little note to say how wonderful the illustrations by Portia Rosenberg are – I think she captures Strange in particular wonderfully.

Note 2: I am yet to watch the BBC production of this book, although I am keen to.